What Code Editor Should You Use? Find The Best!

Wondering what code editor you should use? If you're keen to really dig into web design and control your website yourself, then an important tool you'll need is some kind of code editing application. Simply said, a code editor is a simple piece of software that allows you to write and edit code by hand. Even if you're running a WordPress website, a solid code editor is a must-have tool for business owners who want to own and control their website themselves.

Code editing applications let you work directly with the background code that runs your website. If a problem comes up, or if there's a specific customization you'd like to make, getting at your website's code itself is often the best option. Metaphorically, it's like you're popping the hood and rooting around in the engine to handle the task directly. Being able to handle your website's background code, even in a small way, frees you from having to be reliant on an outside designer—you'll be able to handle things yourself. And it's really not that hard.

Being able to edit your site's background code directly is, well, as direct as you can get to working on your web pages. And you can do this with a code editing application.

So what we'll do in this tutorial is answer the big question, "what code editor should I use?" We'll run through a few brief code editor fundamentals so that you'll understand how it all works. We'll talk about minimum requirements, some additional options, and what you won't need at all. In The Best Code Editors For Online Business Owners, I'll help you find a code editor that'll fit your needs. As you'll learn below, we don't need anything too fancy—just something that'll handle the job.

I want to mention too that the terminology can sometimes be a bit confusing. Often, terms like web editor, code editor, HTML editor, and IDE are all used interchangeably. There's a lot of overlap and the terminology isn't very clear. With so many tools and applications available these days, and each one offering some similar features and other very different features, it gets very difficult to categorize all of them clearly. So just know that the terminology is very general and non-specific. Heck, even I use terms like web editor and code editor interchangeably!

But what I will do later on is single out the term IDE and talk more about exactly what an IDE application is.

The goal is to help you find the best code editor that you should use!

Okay now, with all that out of the way, let's get started. To get us rolling, let's talk about what we'll need at a minimum for editing our website's background code...

Alright, to get started, what you'll need at a minimum from a code editor is surprisingly simple. At an absolute base-minimum, all we need is an application that'll handle plain text. That's it! So, you could actually get away with using Notepad on Windows (not to be confused with WordPad), or TextEdit on the Mac. Notepad and TextEdit are plain text editors that come with your operating system of choice. And they don't do much more than allow you to type and edit text.

Now, while it's possible to use these plain text editors to work on code, actually using them to work websites is incredibly inefficient. They lack a lot of features that would make working on code much, much easier. Simple extras like line numbers or displaying code in different colours makes the process of directly editing web pages much easier and faster. 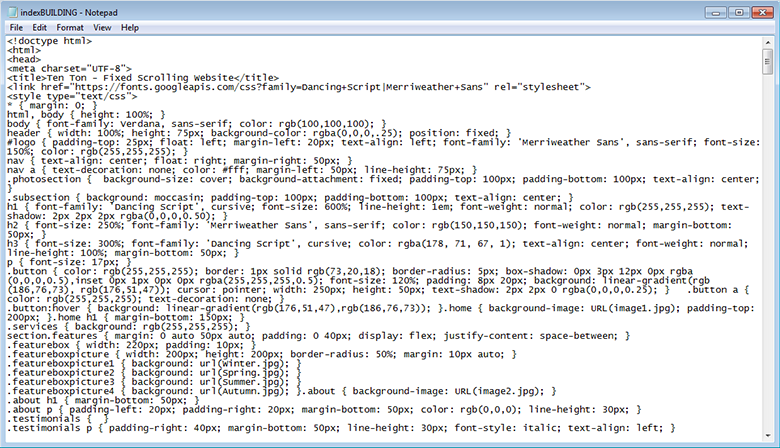 There's a problem down on line number 953. Happy hunting!

So even though a plain text editor is all we need at a minimum, going with an editor that's intentionally designed to work on websites makes the job a lot easier. Because these applications are intended to edit websites and code, they contain handy, extra features that make the job go that much faster.

Code Editors That Are Much Better Than The Minimum

So we know that going with a plain text editor like the ones that come with our Windows or Mac computers will work for editing our website's code. And in a pinch, sometimes this is all we have.

But as we just discussed, having even just a few extra features like line numbers, code collapse, and coloured syntax makes it much, much easier to edit our code. Some of the best code editors offer even more powerful features. Extras like code snippets, project management, automatic code completion, debugging tools, and other features make editing your code and working on your web projects a breeze. 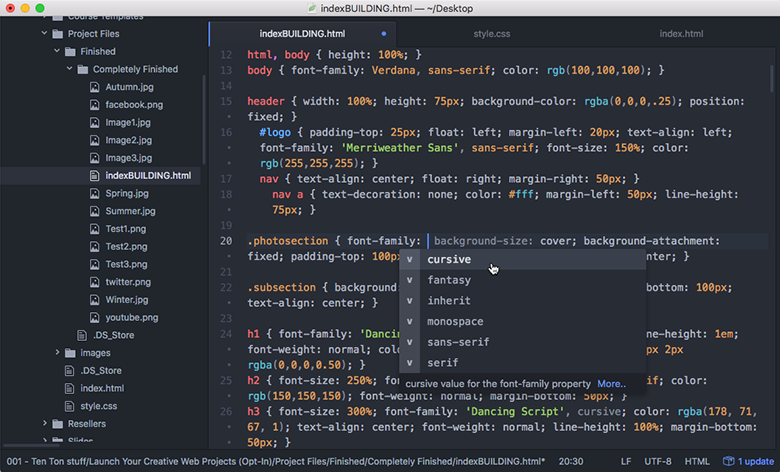 Modern code editors like Atom contain many features that make handling code a breeze -- you should seriously consider using this top code editor!

And if any of this stuff is starting to get confusing, don't worry. It's all very simple and straightforward once you get the hang of it.

And the good news is, there's no shortage of good code editors for you to choose from. Some code editors are paid, many are free. Some are Windows-only, while others are Mac-only. And some of the best ones I've found are cross-platform. We'll take a look at specific editors and compare their features in another tutorial.

I want to stress too that while having a code editor in your toolbox—and being comfortable using it—is critical, it doesn't really matter a whole lot which one you use. Aside from their unique interfaces and a few feature differences, they all pretty much do the same thing. So, which one you wind up using with your business website is a matter of personal choice.

So at this point, we're looking good—we'll be going with a dedicated code editor, there are plenty to choose from, and I should mention that many are completely customizable, too. Next, I want to discuss with you what you should absolutely not do! Let's see what that's about...

Whatever You Do, Don't Use These Applications To Edit Code!

So far, we know that plain text editors are what we need at a minimum to be able to handle the code that runs our website. And we also know that going with a proper code editor offers many advantages. It's at this point that I want to caution you against using a writing application that isn't a plain text editor.

Specifically, word processors like Microsoft Word, Apple's Pages, or OpenOffice Writer are absolutely no good for editing websites. These applications are not plain text editors. Instead, word processors inject their own text formatting into the documents they edit. What does this injected formatting do? Well, it makes your website do this... 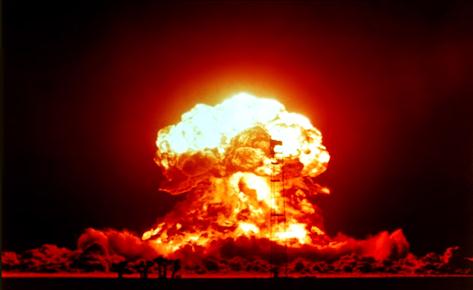 Word processors in general tend to have this effect on one's productivity.

So if you want to avoid a brief fireworks display followed by weeks and weeks of anger, frustration, and questioning your place in the universe, just make sure you stick with a plain text editor!

Now if this wasn't a technical enough explanation, here's what Wikipedia tells us about the differences between word processors and plain text editors:

"There are important differences between plain text files created by a text editor and document files created by word processors such as Microsoft Word or WordPerfect. A plain text file uses a character encoding such as UTF-8 or ASCII to represent numbers, letters, and symbols. The only non-printing characters in the file that can be used to format the text are newline, tab, and formfeed. Plain text files are often displayed using a monospace font so horizontal alignment and columnar formatting is sometimes done using space characters. Word processor documents are generally stored in a binary format to allow for localization and formatted text, such as boldface, italics and multiple fonts, and to be structured into columns and tables."

Kay, my eyes glazed over after about the halfway point, but hopefully that clears up any lingering doubts!

With all that out of the way, let's talk about something else we can avoid: Full blown IDE's...

What You Don't Need To Edit Code: A Full Blown IDE

In web design, the term IDE sometimes gets thrown around. Have you heard this term before? IDE stands for Integrated Development Environment. As I mentioned way back at the beginning, terms like code editor, HTML editor, web editor, and IDE are all used interchangeably. And as I said earlier, there's so much overlap with these kinds of applications that it's difficult to categorize them.

But using the strict definition of the term, IDE’s are development applications that are much more powerful than simple web coding editors. They're used for much heavier programming purposes, assisting Java, C++, or .NET developers to build applications and handle back-end web development.

Obviously, this is way, way beyond our needs. So while you may have heard of applications like Vim, Netbeans, Eclipse, or Aptana Studio, these tools are way more powerful—and frankly way too complex—than what we, as self-reliant business owners, would ever need. 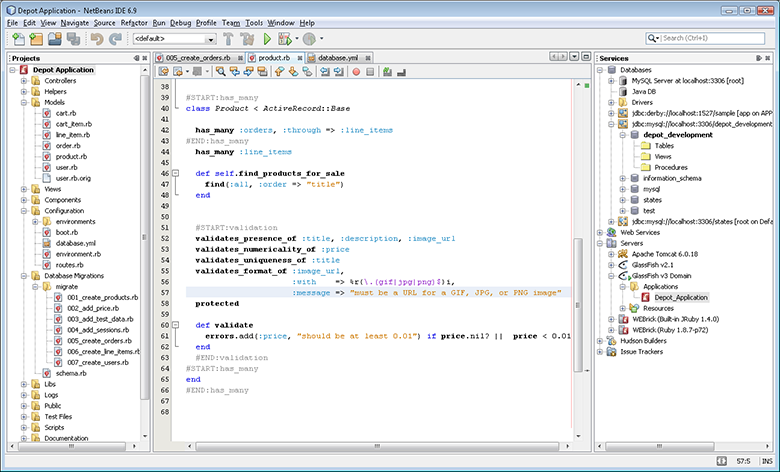 And while some web editors can be expanded and scaled up to be IDE's with the assistance of plug-ins and add-ons, by themselves they're not IDE's at all.

So the take-away here is that for the sorts of things that small business owners like you and will want to be able to do (fixing minor problems, customizing our website... things like this), IDE's are way too powerful and complex for our needs. So unless you're already using one of these applications, and are comfortable using it, we can safely steer clear of IDE's.

That said, if you want to learn more about IDE's, there's a ton of information available—like this article from Mashable.

Where To Go From Here

Well, we've covered a lot of ground and I feel like we're off to a great start with code editors.

Right off the bat we covered some terminology and talked about what we would need at an absolute minimum for editing our website's background code. Remember, at a minimum, all we need is some kind of plain text editor. And while a plain text editor can handle code, we learned that having some kind of dedicated code editor provides us with additional features that makes the job go that much more smoothly.

Then, we talked about why word processors are no good for editing code and why we must avoid using them. Finally, we discussed IDE's and why they're really not necessary for the kind of web work you and I will be doing.

Again, we're off to a great start. You've been introduced to the subject of code editors and some things to look out for. Now, I'd love to dig deeper and take a look at some specific code editors for you to consider while running and working on your business. I look forward to showing you some specific editors in the next tutorial, The Best Code Editors For Online Business Owners.

I'll see you there!

Hey there, I’m Geoff! Business, marketing, and the web can seem like a tangled, confusing mess, right? Well if you wanna get clear, straight info on all this stuff (no gimmicks or hypey nonsense)...then you're definitely in the right spot! Start here (free!)