Which One, Dreamweaver Or WordPress?

Often, I get asked which approach people should take, Dreamweaver or WordPress. That's a really good question, especially for someone just starting out, who's not sure which way to go.

It's important to know what WordPress and Dreamweaver are, and how they differs from one another in order to make a more informed decision about which one to use.

In fact, I've put together an in-depth video that digs deep into the differences between WordPress and Dreamweaver to help you pick the right tool to use. In the video, we compare Dreamweaver and WordPress's functionality, how they work, how easy they are to use, costs, and more. I've embedded the video below.

Are you looking for this video's show notes? Look no further!

Or, if you'd prefer a written comparison of Dreamweaver and WordPress, then keep on reading!

Understanding The Differences Between Dreamweaver And WordPress

Making a direct, side-by-side comparison of Dreamweaver and WordPress is pretty tricky. Yes they both allow us to build websites, but they're very different tools. Let's talk about each one, and then we'll try to compare them to one another.

First off, Dreamweaver is a WYSIWYG (What You See Is What You Get) editor—it's often times simply referred to as an HTML editor. The idea being that you work in a visual design interface, while Dreamweaver writes all of the code for you in the background. You can use menu commands, dialog boxes, panels, and other workspace elements to build your layouts, and remain blissfully unaware of what's happening in the background. 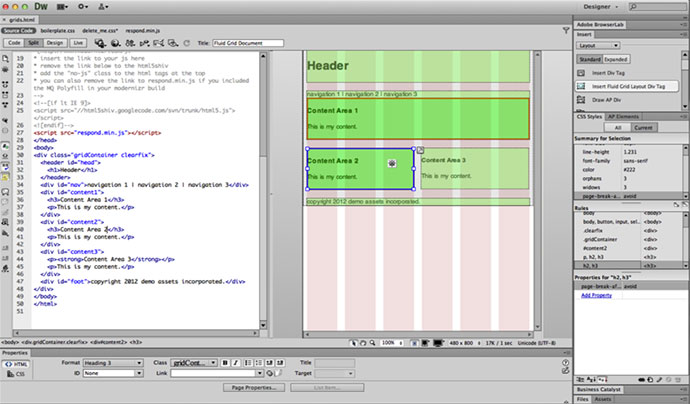 Dreamweaver's visual interface handles the design, while all the code is written for us in the background

Once your layout and overall site is complete, you're left with a set of HTML, CSS, and graphic files which will then need to be uploaded to your live web server in order to be publicly available.

WordPress takes a very different approach. It isn't a piece of software that runs on your computer; it runs on a live web server. At it's core, WordPress is a set of PHP files (which contain HTML, whose design is handled by CSS) driven by a MySQL database. This may sound a bit technical, but WordPress was created specifically to make web publishing simple and easy, even for non-technical users—so all this techie stuff is handled for you. In fact, many web hosting companies provide easy one-click WordPress installers, making the process a breeze.

And at the same time, those wanting to dig deeper into WordPress can lift the hood, get into the code, and customize things as they wish. 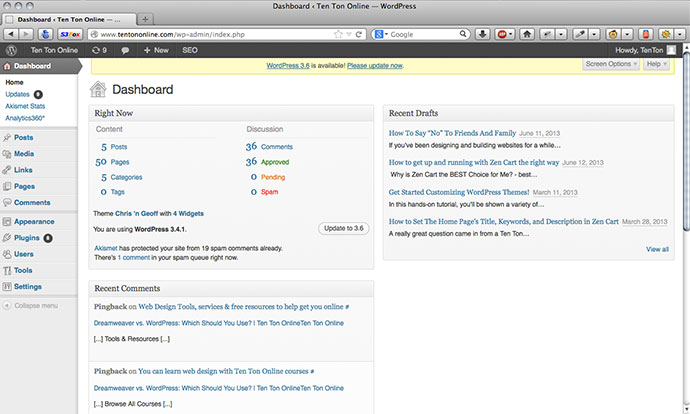 Once WordPress is installed on your live web server., you can begin building sites pages, posts, and content, all via WordPress's back-end admin console. And, because you're working off a web server., everything's "live" online. In this live environment, you have the ability to publish, unpublish, or mark content as draft as you go.

So as you can see, Dreamweaver and WordPress are very different animals, although the end result is the same—getting content published online. Let's now take a more in depth look at these two tools.

An Even Closer Look At Dreamweaver vs. WordPress

So we're getting a handle on what Dreamweaver and WordPress are, and perhaps you're starting to piece together the differences between these two, but let's now take an even closer look. As different as they are, I'll do my best to do as close a side-by-side comparison of the two as I can.

Let's begin with Dreamweaver. It's made some big strides over the years, especially with newer features like Fluid Grid Layout and jQuery UI widgets.

When we begin building a new site in Dreamweaver, we first have to define our site; then we begin with a blank file or possibly a template. Staring at a blank canvas and not knowing where to start can be somewhat intimidating!

And although Dreamweaver will let us build fairly intricate sites, it's approach is often clunky and overly confusing. Additionally, it has a somewhat confining nature as well. What I mean by this is, the vast majority of users are going to be limited to creating static, rigid websites; in other words traditional websites that lack dynamic content, navigation and structure. 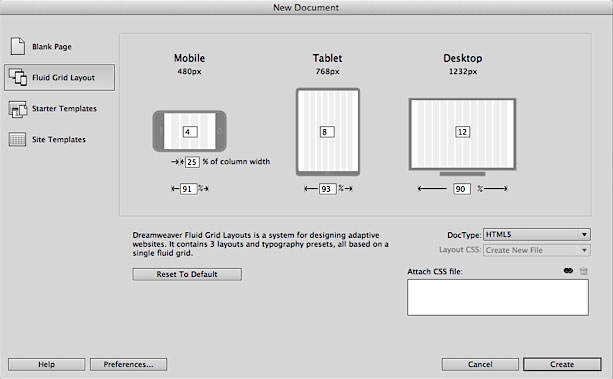 While Dreamweaver's visual approach may sound great in theory there are some shortcomings there as well. For instance, what if you want to achieve a certain result, but no command or menu option exists to achieve it? Even worse, what if something goes horribly wrong and half your layout gets blown out? Without having an understanding of HTML, CSS, and web design overall, fixing problems or achieving certain results can be a huge hassle.

Dreamweaver does have some positives going for it, however. First, once you're up to speed with it, you can build some very nice sites and layouts. Dreamweaver's also one of those programs that grows with you as your skills develop. Beginners often start inside the more comfortable Design View, then start getting a taste for code in Split View, which gives us a side-by-side view of our layout in both design and code; and then finally, many wind up using Dreamweaver's full Code View.

How WordPress Stacks Up

Now over to WordPress. As I'd mentioned earlier, it was intentionally built to be simple and easy to work with, especially for non-technical users. What's more, it's incredibly powerful, customizable, and extendible—and it gives us a much more modern approach to building websites.

There are two sides to a WordPress site: the public-facing side, which is what your visitors see, and a behind the scenes admin console. This is where we'll be spending the majority of our time, adding content, making changes, and customizing our site.

Unlike Dreamweaver, where we start with a blank canvas, with WordPress we begin with what's called a theme. A theme is the visual design of your WordPress site, and you can change your site's design with just a few mouse clicks. Generally speaking, a theme has four areas: the header, content area, sidebar, and footer—and everything's pre-formatted for you (and of course, you can change and customize things to your liking).

With WordPress, we can build small, static sites (just like the kind we can build with Dreamweaver), or dynamic blogs, interactive sites, online stores, and even large and complex sites. WordPress really can handle it all. In fact, anything we can build in Dreamweaver we can create with WordPress—and much, much more.

One of WordPress's most powerful features is plug-ins, that is, additional add-ons that expand the capabilities of your website. And there are literally thousands of them available. For example, you could incorporate social media into your site, image galleries, membership areas, and many, many other possibilities...all with a few mouse clicks. 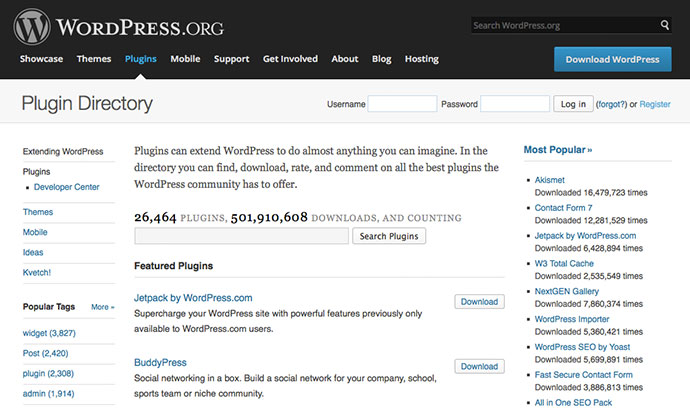 One of WordPress's most powerful features, plug-ins, allow us to extend our site's capabilities

And much like Dreamweaver, WordPress grows with you as you gain skill and experience. As your comfort level increases, you can begin venturing into some of the code via WordPress's built-in code editor, and you can even begin customizing aspects of your site if you wish.

Earlier I mentioned themes. If you want to begin freelancing and build sites for clients, you should seriously consider using WordPress as your platform of choice, and learning how to build custom themes for it.

Are there any downsides to WordPress? Like Dreamweaver, things can get overly technical if you dive in too deep too quickly or start fiddling with code that you don't quite understand. It's also important to make sure your site is secure and backed up on a regular basis as well, which can be handled by plug-ins.

Beyond these issues, WordPress is fairly intuitive, easy to learn, and gives us the horsepower to build the sites we want.

Wrapping Up Our Side-By-Side Rundown

I really do want you to go with the tool that feels most comfortable to you. That said, I'd like to encourage you to start using WordPress. It gives us a much more modern approach to building sites, and really is where things are now.

I know a lot of people are still using Dreamweaver, but after using WordPress for so long, when I go back to Dreamweaver, I feel like I'm being strapped into a straightjacket! For my personal and professional work, I don't build sites without WordPress. Ever. From simple sites that have only a few pages to something as involved as a monthly membership site, 100% of my sites are done with WordPress.

So while Dreamweaver was the web publishing titan for many years, these days it's looking a little tired and old fashioned. And it struggles to handle the demands of modern web design. This at least makes the choice easy for me, and I hope you find the decision easy as well.

If you'd like to get your website online quickly and easily with WordPress, be sure to check out my How To Get Started With WordPress course. Or, if you're still thinking Dreamweaver's the way to go, then Building Websites With Dreamweaver is for you!

Hey there, I’m Geoff! Business, marketing, and the web can seem like a tangled, confusing mess, right? Well if you wanna get clear, straight info on all this stuff (no gimmicks or hypey nonsense)...then you're definitely in the right spot! Start here (free!)